Once only available for military training, flight simulators have come a long way in the past 35 years and are now becoming more common tools in flight training school. Due to the cost and complexity of simulators they were not typically used in helicopter schools until more recent years. So that begs the question, what has caused this recent influx of use for helicopter simulator training in helicopter flight school? 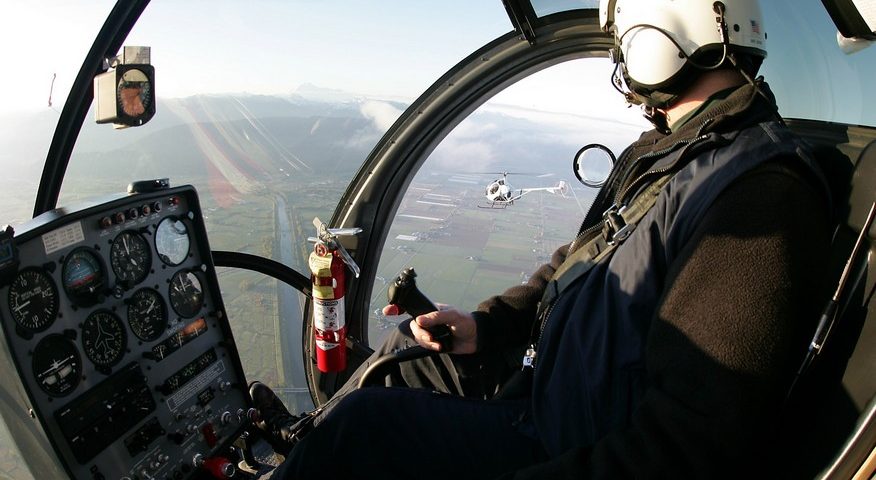 Upon first glance at the question, the first reason for the transition to simulator training in flight schools was the further expansion for offshore drilling, which requires the flying of much more complex and larger aircraft. The second reason for this transition has come much slower and with time. This bigger picture reason is due to the advancement in the technology of computer software allowing more realistic training and simulations than ever before. With flight simulators becoming more prominent in helicopter training, you may be wondering what the pros and cons of using a flight simulator when you learn to fly a helicopter are and how it does or doesn’t help you become a better pilot.

With great strides made in computer software programs over time, simulators are able to create a very realistic simulation of real life situations such as hospital landings, night flying, point-in-space approaches, confined area maneuvering, ship landing, and white-out and brown-out situations. Another benefit of helicopter simulator training programs is that they can give a pilot training for more difficult flight situations and give them the opportunity to master the initial technique and procedures before throwing the trainee in a situation that could be dangerous for someone who lacks training. Simulators provide a safe environment for pilots to train and learn while still being able to make errors that do not hinder the safety of themselves or others in the aircraft.

While pilots will ultimately need actual flight time to be able to achieve their licensing, simulators offer a more economical way to begin basic training of pilots before they begin logging their in-air hours. Simulators can provide for hours of training at a significantly lower cost that would come with such expenses as fuel and maintenance of the aircraft. With less use of actual aircrafts during training helicopter training, schools will also be reducing overall emissions, making flight simulators an economical and also an environmental option for the early part of a pilot’s training. A final benefit of simulator training is that it can be customized to individual scenarios and situations that students will need to be prepared for depending on their desired choice of career or overall training goals.

While the benefits of flight simulators for helicopter training are many, there are a few drawbacks to simulation training. The first one being that even though the simulations can be incredibly realistic it is different from a real-life experience. When the real-life stress is added to an emergency situation during a flight, a student may react differently and less calmly when it is occurring versus when they were safely in the simulator. Using a simulator only may not give instructors an accurate portrayal of how a student may react in an emergency event.

Another usually less problematic con of flight simulation training is that it will not simulate the motion that may normally be felt during a live training. While students may fare ok in the simulators, when logging live hours, they may find that the motion, wind, and turbulence can make them nauseous or give them other symptoms of motion sickness. Additionally, some pilots who may perform fine in the air may have problems in the simulators resulting from what is called “cybersickness.”

The 6dof flight simulation sports platform improves training efficiency and R&D costs. It can also improve the safety of training and testing after repeated tests and simulations. With these advantages, it has become more and more scientific research institutes and flying Favor of training. Nanjing Total Controls specializes in the research and development of a six-degree-of-freedom motion platform. We have a strong technical team and many years of project development experience. Welcome to consult!