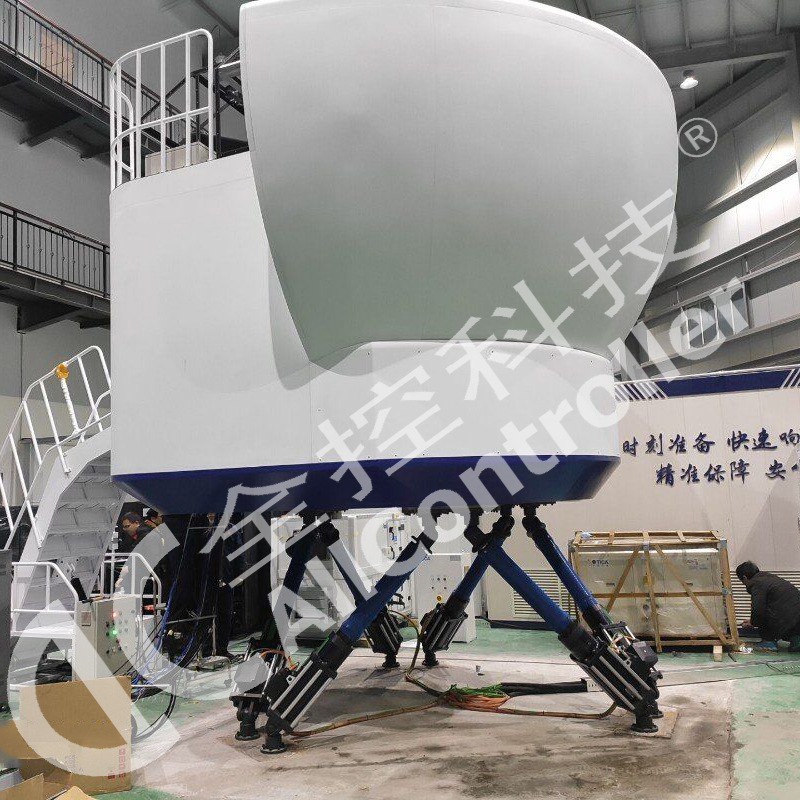 Nanjing AllControl is commissioned by the customer to develop and produce a six-degree-of-freedom flight and refueling simulation platform that simulates the state of refueling and refueling on the ground. The platform is composed of six electric cylinders, six upper and lower universal hinges, and upper and lower two. The lower platform is fixed on the foundation. With the help of the telescopic motion of six electric cylinders, the movement of the upper platform with six degrees of freedom (α, β, γ, X, Y, Z) in space is completed, so that each A space motion gesture. The six-degree-of-freedom motion platform involves a series of high-tech fields such as machinery, hydraulics, electricity, control, computers, sensors, spatial motion mathematical models, and real-time signal transmission processing. Therefore, the six-degree-of-freedom motion platform is a symbolic symbol of the level of control in the field. In particular, the control cabinet simulates the state of refueling during flight, and accurate simulation helps to better conduct scientific research and solve problems.

Electrical control system part: The six electric cylinders use absolute encoder servo motors based on EtheCAT bus, and are directly connected to the PC controller through network cables. The system control principle is to enter the computer operation through the computer communication interface of the lower computer through the state signal (3 displacements X, Y, Z and pitch angle α, tilt angle β, steering angle γ) of the output platform attitude from the upper computer, and through the communication interface of the lower computer. The command signal converted into 6 servo cylinders is controlled by the servo, so as to obtain the actual posture of the motion platform in space at the current moment (3 displacements, 3 rotation angles), and through the conversion of the encoder feedback signal, it is fed back to the system through the bus. The computer completes the calculation and adopts digital closed-loop control. Six electric cylinders coordinate actions at the same time to form the instantaneous posture of the platform movement. The elongation of each electric cylinder is accurately controlled in real time, and the information is transmitted to the controller. The controller ensures the coordinated action and control accuracy of the six electric cylinders through calculation.

The platform control system adopts an all-digital servo control system. According to the posture command, the platform is used to inversely solve the elongation of the six electric cylinders, which is transmitted to the driver through the bus, and the driver obtains the information and drives the motor to rotate. The platform also runs to the corresponding posture. The driver can detect the torque, speed and position information of the motor in real time and send it to the controller through the EtherCAT bus to form a closed-loop control system.