In recent years, with its unique performance and maneuverability, helicopters have played an irreplaceable role in military and civilian use. Especially recently, my country has opened up low-altitude airspace to allow private helicopters to fly. Therefore, daily flight training for helicopter pilots is required. becomes more urgent.

The traditional helicopter pilot training mode through real helicopter flight time is often limited by weather and venue, and the cost has always been high. However, with the development of virtual reality technology, flight simulators have become an indispensable simulation test equipment in pilot training and aircraft research and development with its advantages of safety, energy saving, economy and high fidelity. 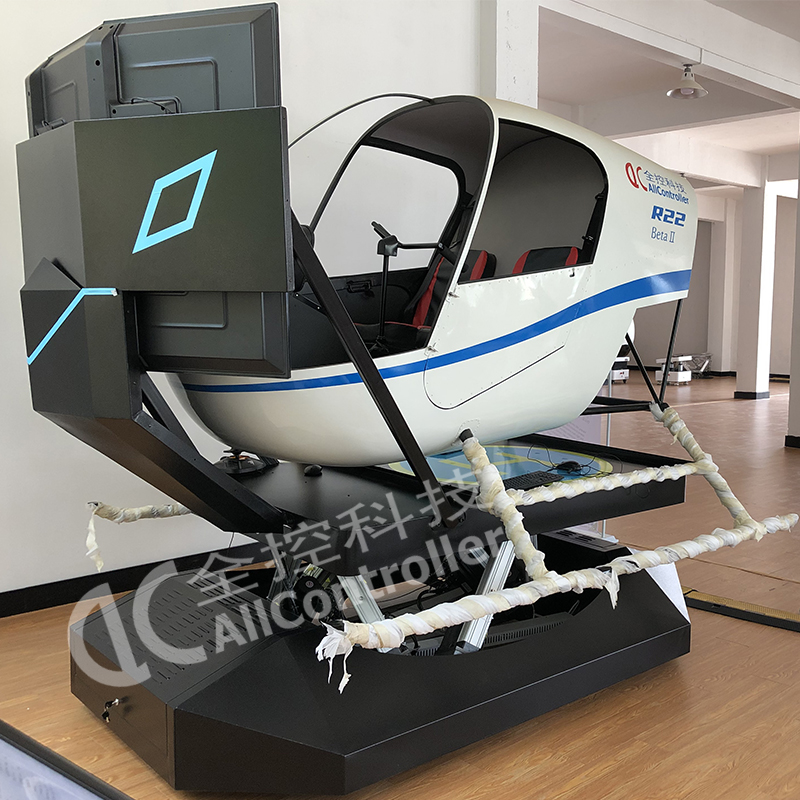 Helicopter flight simulation cabins are widely used in ground training for pilots, which can realize basic driving skills and special situation training. The simulator adopts the mathematical model of a certain type of helicopter, has a realistic cockpit environment, control mechanism and cockpit instruments, and is equipped with a multi-degree-of-freedom dynamic platform to simulate the attitude change of the helicopter.

This R22 helicopter flight simulation cabin adopts a six-degree-of-freedom electric cylinder dynamic platform, three 58-inch monitors, and a high-performance host. In order to simulate the real flight, we use advanced technologies, such as computer imaging technology, virtual reality technology, dynamic split screen technology, etc., to show the airport, sea, city and port realistically in front of the driver. The system can be closely integrated with the multi-degree-of-freedom platform below, and the trainees can truly feel the real tilt effect during the flight of the aircraft.

1. Simulate the movement of the aircraft with six degrees of freedom, including pitch, (left and right) roll, vertical lift, and left and right yaw movements;

2. Simulate movements caused by changes in various flight conditions of the aircraft, such as atmospheric disturbances and up and down jitters;

3. Simulate the landing touchdown attitude and collision and the motion that occurs when using the brakes;

4. Simulate vibration and buffeting at frequencies close to the real aircraft and buffeting caused by atmospheric turbulence in the corresponding degrees of freedom.

Different types of flight simulators have different characteristics, but they all have the characteristics of actually experiencing the feeling of flying an aircraft in the air on the ground. As far as the training flight simulator is concerned, using it for flight training has many outstanding features, mainly in the following aspects:

Training on the simulator can repeatedly practice difficult driving actions and handling special situations, and can also make the pilot students often under the direct observation and guidance of the instructor, giving full play to the role of the instructor. In some simulation training systems, one instructor can guide multiple students to operate at the same time, which makes more effective use of the flight instructor's teaching time and accelerates the training process.

Training pilots with simulators can save a lot of training money for many reasons:

First of all, a full-featured flight simulator is usually much cheaper than a real plane, especially for large aircraft. Second, the direct cost per hour of training with a simulator is much lower than training with an airplane. In addition, since simulation training does not require a large number of support personnel such as navigation, communication, maintenance, and field maintenance, the cost savings is considerable.

Using simulators for training, there is no problem of flight accidents, and the lives of pilots and the aircraft will not be threatened. Furthermore, pilots can repeatedly practice on the simulator how to deal with various faults and emergency situations such as engine stop or misfire. In this way, when a similar situation is encountered in an actual flight, one can be fearless in the face of danger, reduce or avoid flight accidents, and ensure flight safety.

In addition, simulation training has the advantages of improving air traffic congestion and reducing environmental pollution.